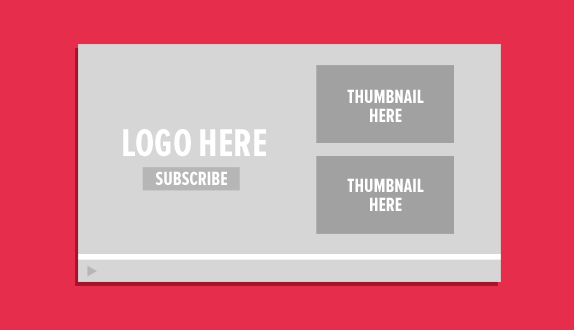 I've been trying to sculpt a good end card for my videos in the future, but I learnt that spacing out the components like social media and other recommended videos wold be hard to do: If you haven't used an end card before, you CAN'T use the whole space for the video to make it. I found that out the hard way aha.

So, I've decided that I'm going to try and get the dimensions of every component to do with end cards, so everyone knows the exact measurements for each video they do!

Through Photoshop patterns, I decided that I'd try to find out the specifics of how big the box for end cards is. Firstly, I made vertical lines that are 10 pixels wide in a 1920 x 1080 image.. The pattern goes Red, Green, Blue, Orange and then alternating between Black and White to make things easier to differentiate.

Looking at this first end card screenshot, I put 2 video frames as far as they could go horizontally; the cards were situated within 2 lines, not on the border of them. So, going deeper, I broke these 2 individual lines up into 5 segments of alternating colour, and redid the image to get more specific. This time, it looked like this. It might be a little hard to see, but after zooming in, I found that the border for the end card box horizontally situates at 42 pixels and 1878 pixels.

Going for the vertical lines, I just remade the pattern except it goes vertically to make horizontal lines instead. This screenshot has a clear top border, but an unclear bottom border. As the first video is line with the top of the black line, the top border is 140 pixels. Repeating what I did with the other lines, I broke down the green line into 5 2-pixel lines, and concluded with this. I had to fully zoom in to see where the line is, but while it could be up to debate, I found the bottom line of the border to be at 915 pixels.

For this one I'm only going off the size of the smallest possible video/playlist link you can add. Also, for this one, I've made another pattern of just a checkerboard where each square account for 20 pixels. This screenshot, when considering that the rightmost side of the border is 2 pixels 2 short, makes me think that the length of a video/playlist frame is 620 pixels. HOWEVER, I'm a little unsure about this one, so you may want to check for yourself if you can, but I'd say I'm 80% confident this is right.

I've lumped these 3 together because they're the exact same dimensions at their smallest size. I've had to take an alternate screenshot for this one because it's better to show that in this screenshot, the circle has a perfect 300 x 300 frame. So, this means that the circle has to fit in the frame and will be ever-so-slightly smaller than that number, but yeah: Subscribe circles/Channel circles/Links are all 300 x 300 pixels.

So, after doing this all, I made a simple black/white image where the white represents the outro frame, and here it is. When I put it into a video, it was pretty perfect!. So, I hope this has somewhat helped you if you're trying to make an end card that works!