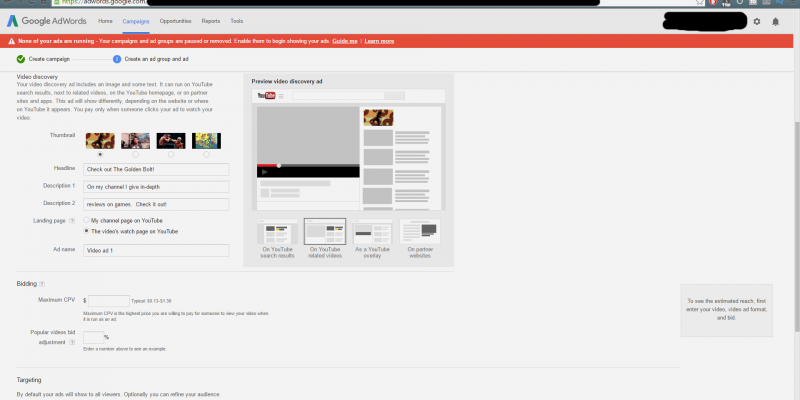 Using AdWords to Advertise Your Channel

If you're on NewTubers, you've probably at some point looked at advertising your channel directly through YouTube. But Adwords is a complicated beast, and there's conflicting reports online about its efficacy, so chances are you decided against it. During the month of July, I put Adwords to the test myself to see just how effective it is, and this week I'll be sharing a bit of a case study on my results. This is going to be a long one!

Okay, if you answered all those questions and you're sure you want to Adwords, here's how to do it!

Simple enough! That's the baby stuff though! Now onto the next step.

First, a couple things to think about:

Here you'll now see all your Ads and their results in (mostly) real time. Adwords is generally a day behind in my experience, so you'll have to wait a bit to get a decent idea of how you're performing. There are six metrics for this: Impressions, Views, View Rate, Average Cost-Per-View, Total Cost, and Earned Views. Impressions is how many times your ad shows up; views is how many times your video is clicked or viewed fully (for Discovery and In-Stream ads, respectively); View Rate is the ratio of these two; Average Cost Per View (CPV) is how much you're paying per click (for Discovery ads), or per view (for In-Stream video ads); Total Cost is obviously the total amount you've paid in; and Earned Views is how many ad-viewers ended up watching at least one more of your videos. That's how you measure how effective your ads really are in terms of YT growth.

You can also run several ads under the same campaign concurrently, so that you can test which videos draw in a larger audience and which ones retain that audience. In my example, I advertised four videos to wildly different results. You can click on each ad within the campaign to check the analytics directly from Adwords as well. Some results are a tad spotty, but in general they're a good idea of how many subscribers a specific Ad has netted you. You can also create different Campaigns and test out the wording of the same video ad to see which nets the most viewers, and so on. (To check Analytics, in the Campaigns page, click on the Videos tab and each Ad in your campaign will have an Analytics button for you to click!) The possibilities are almost endless, and Adwords can be a huge fountain of knowledge for how your channel performs within your target demographic. You can also specify custom rules to stop or restart your ads in case you're tight on a budget; for example, I didn't want to go over $31 in my test month to hold to the $1.00 a day average, so I created a rule to stop the ads altogether at a certain threshold.

I think that's about it for how to DO Ads on Adwords. Now, for my personal results!

Does that mean Adwords is worth it?

Maybe! It honestly depends on your channel type and your audience. For somebody that's putting out weekly content, it meant that I was gaining exposure from a vast swathe of viewers looking for gaming/game review content, many of whom were incredibly receptive! In essence, I was paying a dollar per like, half a dollar for each viewer that came back for more, or half a dollar for each new Subscriber I got!

Adwords is a great tool to use, so long as you use it wisely and so long as your prospective audience is receptive towards advertising. Don't put too much money in - you have to make sure you budget yourself conservatively so that you don't spend more than you can afford. If you're unsure of whether it will be effective for you, you can often deduce a bit from Analytics to see the age of your target audience and you can use outside tools like TubeBuddy or VidIQ to get a grasp of what your viewers may watch in addition to your content. Again, I don't know if I'd recommend Adwords for LP content or any long-term series format - I didn't have to deal with those variables, but based on my experience I don't know if viewers will stick around for the advertisement video unless they're really hooked. In my case, a lot of my advertised-viewers commented praising my videos for actively teaching them about the games in question or because of the insight I gave - implying they wouldn't have stuck around due to the video length if my content wasn't interesting enough. If your long-form series have consistent views from beginning to end, your content is probably interesting enough to keep people interested; if your episode 1 spikes in views and it gradually drops from there, using that series as an advertisement may not work well for you. But again, it all depends on the viewer!

If you choose to try Adwords, good luck and happy advertising!